BAYS is a Science Forum with links with Science, Technology, Maths and Engineering . Boys in years 10 to 13 attend monthly meetings where a visiting speaker outlines their career and work. Last year there have been talks on Biofuels, Mazers, Cardiac surgery, Aircraft Engineering, Radiochemistry, Toxicology, Material Science and Oceanography, delivered by some people at the cutting edge of their fields.  These talks usually talk place in the Physics Lab in Science, occasionally in either the VI Form Common room or Chapel. They are well advertised and the programme can be found below. VI form boys have some input into the speakers who are invited although what is evident is that the range of speakers who collectively have covered many areas of STEM careers has been appreciated with all talks inspiring interest and enthusiasm in students. Girls from SWGS and Godolphin are also invited to attend.

February 2015 - Dr Frances Cooper's talk: "Geology on the roof of the world: From the highest Himalayan peaks to the deepest holes in the Andes"
For more information see the BAYS February 2015 Poster

December 2014 - Two minutes contributions from students and teachers on a topic connecting Science and Christmas.
For more information see the BAYS Christmas 2014 Poster

This year saw the biggest number of students entering the different Olympiad competitions with really pleasing results. Many year 12 students entered this year and they will no doubt do even better next year!

Chemistry results: 2 Gold, 12 Silver and 17 Bronze. 53 entries in total and a big well done to Christopher Williams who came in the top 1% of all entries. Biology Results:4 Gold, 4 Silver 7 Bronze 2 Commended. Well done to everyone, especially Jacob Whatmore who got into round 2 and came in the top 129 out of the 6190 students who entered. 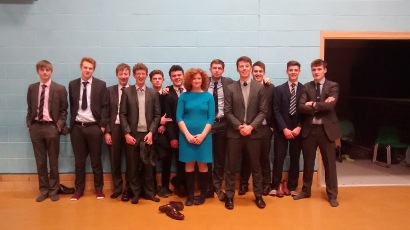 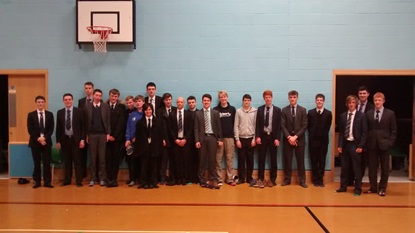 Following the announcement that I’d won the Roentgenium award, my initial reaction was utter disbelief. I’d had an A-level exam the previous day and really only entered it for a bit of fun. Still, over the following days I got down to the business of excusing myself from my family’s summer holiday to Ireland and attempting to contain my enthusiasm for the 3-day summer school in Cambridge that the award entitled me to.

The summer school, run by Dr. Peter Wothers (who presented the 2012 Royal Institution Christmas lectures and is a lecturer at St. Catharine’s College), covered all sorts of material from both organic and inorganic chemistry together with a fascinating introduction to quantum mechanics. Having an interest in Physics and Maths as well as Chemistry, I found the quantum mechanics lectures, which gave a mathematical explanation of the shapes of atomic orbitals really exciting, as it gave me a glimpse of what I might expect to study in a Natural Sciences degree.

The award itself was presented at the Royal Society in November. As part of the event, all the winners were encouraged to prepare a talk on an element of their choice. This proved entertaining, as delivering a talk hurriedly ‘prepared’ the previous night to a room filled with chemistry teachers, professors and some of the brightest students in the country gives a certain adrenaline rush quite difficult to surpass! Nonetheless, nobody pointed out anything incorrect in what I had said, and the whole experience is one I’ll never forget. 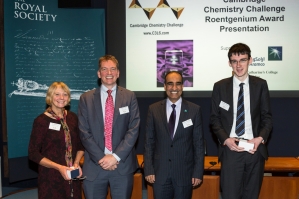 Cambridge University run this challenge which involves monthly quizzes. In addition, there is a competition in year 12 in June which most of year 12 entered last with really pleasing results including a Roentgenium award being achieved by a student who then had the opportunity to go to Cambridge for a Chemistry week in August!

Each year, Bishop Wordsworth’s School hosts the IMechE (Institute of Mechanical Institution) lectures. In 2013/2014 both sessions had a focus of ‘Climate Change’. Dr Sam Healy from QinetiQ and John Savage from the Institution of Engineering and Technology gave a lecture involving some student activities to our year 8 and 9 students. Professor John Shepherd, Professorial Research Fellow in Earth System Science at the National Oceanography Centre delivered a lecture to our Sixth Form. Both of these lectures were incredibly interesting and relevant to many areas of the curriculum – it is not only Scientists that are leading the challenge of addressing climate change!

December 2015 - "Engineering a world champion in Formula One"

Dr Stewart Cotterill – The role of Science and Careers in Sports 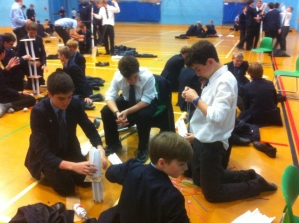 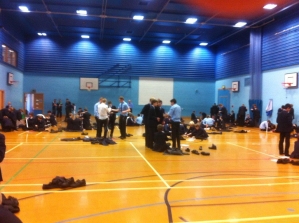 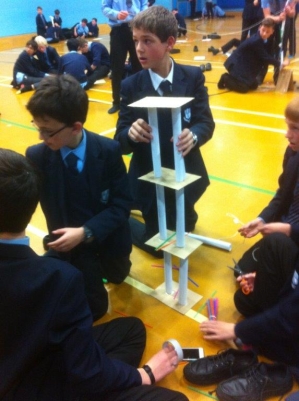 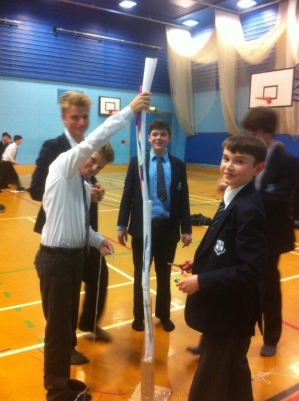 Feedback from the boys:

On June 9th the whole of year 8 attended the Natural History museum to experience their Universities Week exhibition. The boys were able to wander the museum, attend an amusing drama on option choices along with visiting and speaking to a wide range of scientists who were outlining their work. 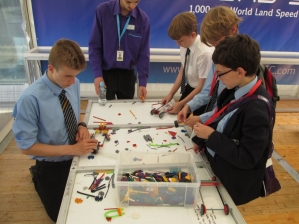 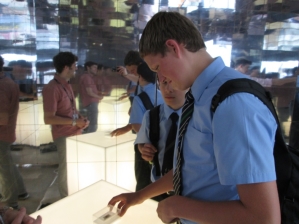 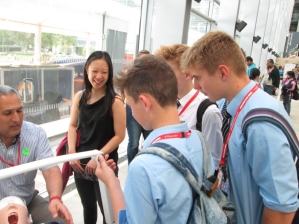 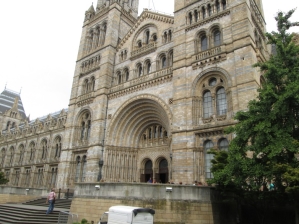 Boys in year 7 undertook a scientific investigation in pairs with their work being presented in the form of a scientific poster which was presented to guests including the incoming year 7 boys on induction day. This was an opportunity for the boys to show their best work and explain both the skills and knowledge that they had developed during their study of science in year 7. A whole range of questions were studied including ‘What is the mathematical relationship between the area of a cardboard sail and the speed of a car travelling down a ramp?’, ‘How does the temperature of a squash ball affect the height that it bounces?’, ‘How does the temperature of an elastic band affect how far it travels?’ ‘The record in the US for skipping is 367 skips per minute. How does the rope length affect the speed of skipping?’, ‘How does the size of a meteorite hitting the moon affect the size of the crater?’, ‘Does drinking coke affect your reaction speeds?’ and many more…. 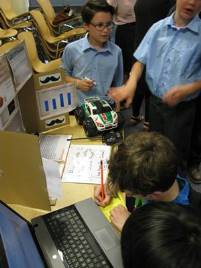 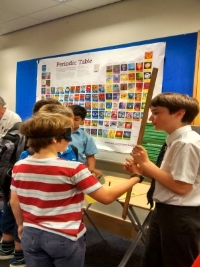 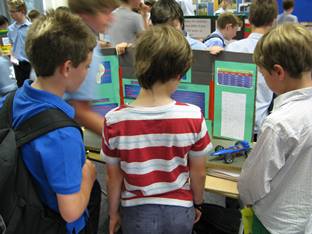 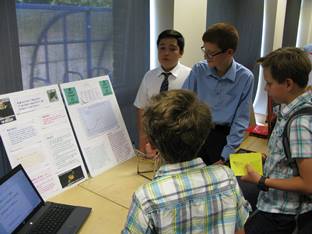 We regularly have visiting Scientists and on occasions they are happy to run informal workshops for students. Last year we were delighted to welcome Professor Colin Blakemore who delivered the annual Mullin’s lecture on "The Unbearable Lightness of Seeing" and also Professor Philip England from Oxford University who delivered a talk on the ‘Santorini Vulcanology’. Both these speakers ran workshops for a number of year 12 boys who had the unique opportunity.

A Year 12 Science, Technology, Engineering and Maths (STEM) day was organised by the careers advisors from BWS and Godolphin. Sixth Form students listened to lectures by Dr Caroline Detchenique from Imperial College, who spoke on Material Science, and Dr Steven Moss from UCL, who delivered a talk on medical research. Students were then able to attend workshops covering microbiology, financial modelling, problem solving, psychology, aerospace and mechanical engineering, creative technology, oceanography and geology. 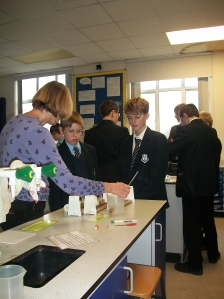 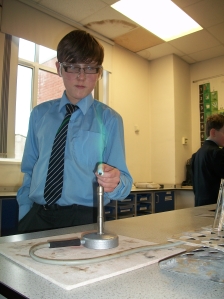 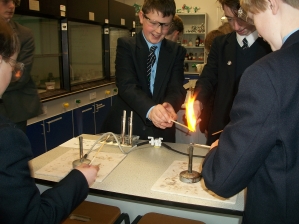 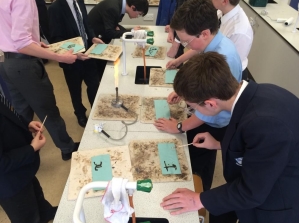 Top of the Bench

This is a competition organised by the Royal Society of Chemistry each year. This year, Portsmouth Grammar school hosted the competition and our team made their way there to take part in the challenging exercise. This year two year 9, one year 10 and one year 11 student formed our school team. They had to do quizzes, questions and practical work demonstrating not only high level Chemistry knowledge and practical skills but also good teamwork. The boys had a fabulous time. 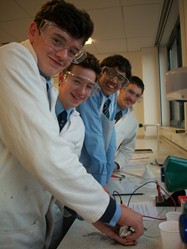 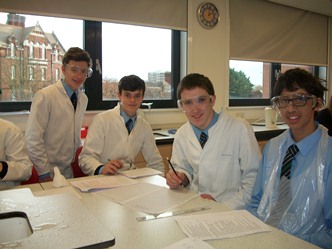 On 2nd July, 21 year 8 boys went to Wiltshire College for a day of “Chemistry at Work”. To start with they were enthralled by the devastating effects of liquid nitrogen and other exciting demonstrations and then moved off to work in groups with other school students. Some boys made very colourful soap in a variety of shapes, others worked out what made water smelly and found out how it was analysed. They saw flames change shape when subjected to a cyclone, and investigated how changing a monomer alters the properties of a polymer. The theme throughout was how Chemistry is important in many different industries and areas of work and the day helped students relate what they learn in school to the real world. 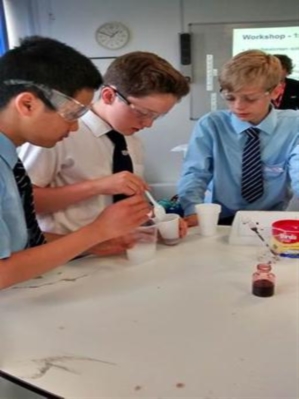 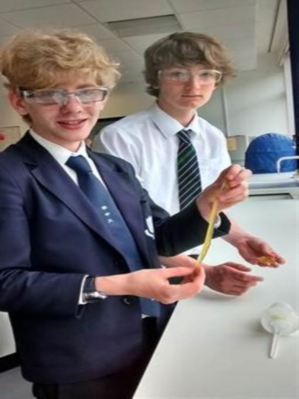