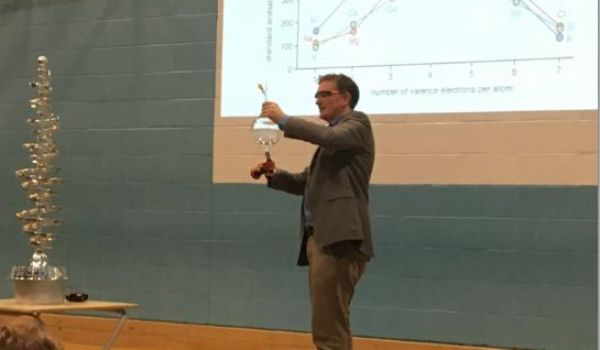 DR PETER WOTHERS visited to talk to all the GCSE and A-level chemistry students at Bishops. The talk consisted of a discussion centred on the first periodic tables, an explanation of the modern-day periodic table and the correlation between groups, periods, valencies and properties. His talk included a number of demonstrations looking at the mass of gold along with some of the interesting and unique properties of diamond. 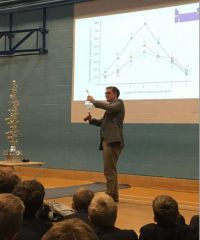 Dr Peter Wothers is a Teaching Fellow in the Department of Chemistry, University of Cambridge and a Fellow and Director of Studies in Chemistry at St Catharine’s College. He has made many radio and television appearances, including in December 2012, when he presented the series of three televised Royal Institution Christmas Lectures.

As well as his incredible experiments, Wothers also displayed St Catharine’s College’s specially commissioned sculpture of the periodic table, displaying all of the elemental symbols and atomic masses and numbers in accurate spiral fashion, representing the size of the blocks of the table.
The renowned chemist began his career at the age of 8, after being bought experiment kits for his birthday. After the talk, he said that “It is nice to see people excited about science in the way that I was”. He often presents to young audiences, because he enjoys getting the interest across to others and wants them to understand that “chemistry is directly related to our world”.

One of the GCSE students said after the talk “I was inspired Dr Wothers’ keenness to explore and display the uniqueness of our world through simple experiments. In fact, I dream of doing the same!”