Tussle at the Ray Mac

I almost didn’t go last Saturday to the home game against Tiverton. The sun was out and that rare event made jobs in the garden an absolute priority. Several cars and a motorbike to clean and grass to be cut for the first time since October; I got that lot done with a few minutes to spare before setting off to Old Sarum and the footy. I arrived with just a couple of minutes to kick-off, so barely time to sit down before the action started and certainly no chance to read any of my book – that had to wait until the interval. The upside was that just for once I escaped the quizzical looks from other Salisbury fans who clearly don’t understand that odd bloke sat on the terrace immersed in a novel. ‘What’s that then, War & Peace?’ I was once hailed with from higher in the stands, and I suppose I can’t really blame whoever that was…

The action on the pitch was frenetic throughout. Salisbury pressure led to a series of near misses, but then a permeable White’s defensive line leaked twice – two Tiverton goals in the space of two minutes meant that Salisbury had a mountain to scale in the second half. Scale it they did, in style, and in fact they deserved to win on the balance of play. It wasn’t to be, but the entertainment value was excellent and it was good to see Steve Claridge’s side playing with skill, structure, determination and heart to emerge with a 2-2 draw. I was glad that I made it. 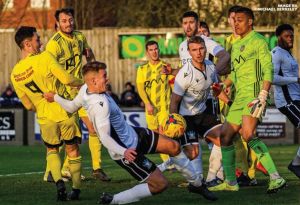 Like many Salisbury fans, I have been following the side for some years, through promotions and (multiple) relegations, professionalism and the trauma of bankruptcy. It’s great to see a local side still at the very heart of the community, running a Foundation, encouraging youth players, developing ladies’ and girls’ sport and engaging with local schools too.

At Bishop’s we have welcomed engagement in a number of ways from Steve and his team, and it’s great to hear that Lewis Benson should be doing some coaching with us in the near future as the latest link. Significant numbers of our alumni, current students and staff are visible at every home game, though I am sure that none of them ever join in with the distinctly risque chanting from behind the opposition goal! If you haven’t been to see them yet then do – the play-offs beckon this season, and the more support that the Whites can get on a Saturday the better!