They started as individuals but ended together...

Anyone who took even a cursory look at the news media over the weekend cannot fail to have been captivated by the coverage from New York of the 20th anniversary of the destruction of the World Trade Centre. It really doesn't matter if you are old enough to remember, or whether the stories and pictures relate to events before you were born. Raw emotion takes time to fade, and two decades are nowhere near long enough for the sense of loss to be dulled, for families to forget the loved ones and for the voids in peoples' lives to be filled. For those of us old enough to see pictures of 9/11 on TV screens the images will be carved on memory for ever. 67 British people were among the nearly 3,000 who died that day in 2001.

Visit New York today and you'll see two enormous holes in Manhattan where the two towers once stood. Water flows continuously down the sides of the bronze cliffs that surround the memorial pools, disappearing into nothingness in a never-ending cascade. Inscribed on the parapets are the names of the 2,977 victims of the terrorist outrage, and those were the names that were read out at the memorial service on Saturday in New York - by relatives - mums, dads, siblings, children and friends. It was incredibly moving, with immense dignity lent by the presence of the current and almost all recent presidents. 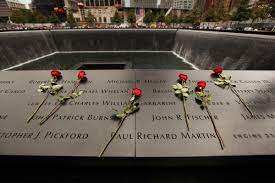 The arrangement of the names on the memorial is unusual - it is not alphabetical, nor by family or date of birth or by district, or employer, or service or rank. Whose name goes where was decided after an appeal by the architects to the public for connections. After over 1200 responses the names were allocated their places, with friends and workmates together, those who shared a by chance phone conversation now locked together by an event that no-one foresaw. And those connections that appeared out of nothing, the intangible links between those who just happened to share a mobile or a lift at a moment of crisis now determine the shape of a memorial to stand for many years to come.

I heard a fascinating interview with one of the trustees of the Manhattan Memorial on Radio 4. She said that putting together the names on those brass plates had also had a profound effect on the team of designers, craftsmen and administrators who worked on the memorial through the decade or so that it took to complete. The quote that I started with was hers; "they started as individuals but ended together". It can take a traumatic event to get people to see what they have in common, what the meaning of a shared endeavour might be and what really matters - not the day-to-day trivia in which we are all immersed, but the values that underpin all that we do.

We start a new school year, more perhaps as individuals than a collective group with a shared identity and purpose. The pandemic has knocked the stuffing out of society in general and schools in particular over the last 18 months. At the same time our school has grown significantly, and so there are a lot of students who may not 'get' Bishop's yet - what it really means to be a fully-fledged member of this amazing community in the heart of Salisbury's Cathedral Close. There's a huge amount to do this academic year to rediscover the glue that holds us all together. It won't happen automatically, we'll have to work at it day in, day out. At the end of the year my aim is that we will have rekindled that force, that collective intent and celebration, that faith that what we are doing is right, and good, and shared.

They started as individuals but ended together. That's where our path lies between now and next July.