Last Thursday didn’t appear to be a very prepossessing day to take the whole of BWS’ Year 10 to London to ‘do’ Shakespeare. Macbeth at The Globe on the South Bank awaited, but the rain streamed down from leaden clouds and so damp were the occupants of the coaches that the demisters failed and our driver had to stop more than once en-route to physically remove the accumulated moisture from the windscreen. It was true to say that I had some misgivings about why I had said that I would go all those months ago. It had seemed like the classic good idea at the time, a day out to give some space for thinking and helping a big trip to happen. A lengthy coach trip, a theatre, a downpour and over 100 teenage boys; what could possibly go wrong?!

In reality, things turned out really well. The Tate Modern provided welcome shelter and a café before the start of the show and excellent work from the big team of staff made the logistics work. We didn’t lose anyone! The play was engaging, right from the very first minute when two of the witches were ‘born’ from a pile of dismembered body parts that had been lying on the stage since before the any of the audience arrived. Actors frequently entered and left the stage through the body of the theatre, so that the kids standing in the pit unintentionally found themselves a part of the performance – including a memorably interactive cameo from the Porter, whose bucket was a constant threat (you can probably imagine what was in it!). The boys were great too – rapt attention for the most part, no doubt mentally comparing what was going on with their class video of Patrick Stewart’s Scottish King. The rain and cold became incidental for many, and in fact there is a sense in which Macbeth is easier to ‘get’ if the weather is as gothic as the plot and characters. 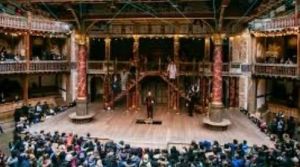 I have seen a fair bit of Shakespeare on stage, in both London and Stratford as well as amateur and touring productions elsewhere around the UK. Thinking back, my first experience was almost certainly a 1976 production of Macbeth, probably in London (I was at school in Kent), when I would have been in the first year of my O’level English course. Frustratingly I can remember little of it apart from a feeling of fascination with the unreal and the raw emotion of what was happening in the small world before me. The details may have faded since over the decades, but that fascination hasn’t gone, and I am sure that an enduring light will have been lit also for many of our boys who visited The Globe last week.