Bishop's found a rich vein of Rugby talent through the late 1980's, resulting in two BWS alumni simultaneously in the England Team in due course. One of them, Dave Egerton, who played at No8 for England, sadly died last week after a short illness. 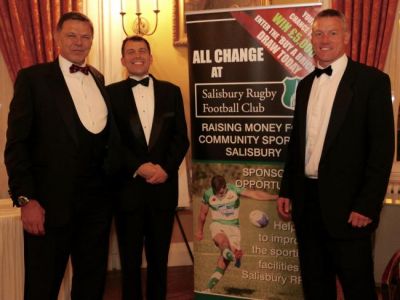 A prominent part of both BWS' and Salisbury RFC's heritage, I cannot improve on what Richard Larcombe (Salisbury RFC President) wrote for last week's Salisbury Journal...

"Very sadly I write to tell you that David Egerton, one of our Honorary Life Vice Presidents, died suddenly yesterday aged 59 with complications from Covid after being hospitalised a few days earlier.
Dave was educated and learnt his rugby at Bishop Wordsworth's School and then at Loughborough University. He played regularly for Salisbury following school and then whilst at university. He was an extravagantly gifted back row player who went on to play for Bath, England and then for the British and Irish Lions against France.

He made 163 appearances for Bath in his ten years there during their hugely successful period with Jack Rowell, winning five league titles and five domestic cups. Between 1985 and 1995 he averaged a try every three games for Bath, a phenomenal return, helped perhaps by the rumour that he could score by stretching from the five metre line? He won seven England caps and, by general consensus then and now, would have won many more had his time not coincided with Dean Richards as England's No 8.
Dave went on to be Head Coach at Bridgwater & Albion, then Coach at Bristol Rugby and more recently was a pundit with BBC Radio Bristol.

I was fortunate enough to play a number of games at Salisbury with Dave and besides being an exceptional rugby player, he was very committed, funny, an engaging raconteur, and wonderful company before, during and after games. He never completely lost touch with Salisbury, he has been a regular at our Christmas VP Lunches and recently has been generous with his time and support for our fund raising for the new changing rooms.

Our thoughts are with his family: wife Amanda, children William and Olivia, brother Andy, another ex Salisbury player, and his Mum and Dad, Sally and Bob, both supporters of our club".